In 1597 Giles Allen refused to renew the lease on the land where The Theatre stood, home to the Lord Chamberlain’s Men. Over Christmas 1597 the Burbages dismantled The Theatre and stored it on the north bank of the Thames.

In order to raise the funds to lease new ground to rebuild their theatre they offered five members of the acting company the chance to become shareholders at the cost of £10 each. One of these five was William Shakespeare. The land chosen was south of the River Thames in Southwark and was renamed The Globe Theatre. The Globe opened in 1599, most likely with Shakespeare’s Julius Caesar. Shakespeare was to be their resident writer but the Lord Chamberlain’s Men also performed works by Ben Johnson, John Fletcher and Thomas Dekker.

On 29th June 1613 during a performance of Shakespeare’s Henry VIII a fire, caused by cannon fire, set the theatre alight and burnt it to the ground. A second Globe Theatre was quickly built over the foundations of the previous building and opened the following year. However, Puritans closed all theatres in 1642 and the theatre was most likely demolished in 1644.

A modern reconstruction of The Globe opened in 1997, 750 feet away from the original site and it was built based upon all existing evidence of the original building. 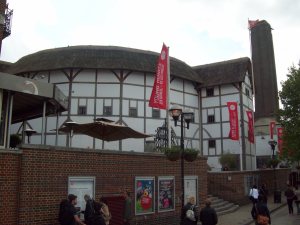