In the years leading to her death she had lost many of the courtiers that were close friends of hers from Robert Devereux, who was executed for treason in 1601 to Robert Dudley, who died in 1588 and was believed to be Elizabeth’s true love. Elizabeth’s most trusted advisor William Cecil died in 1598.

In late 1602 Elizabeth was out walking and caught a chill and began complaining of feeling unwell. Elizabeth retired to Richmond Palace in March and refused to allow the doctors in to examine her, she also refused to take to her bed and rest. Elizabeth would stand for hours and sat occasionally. Elizabeth eventually lay on the floor for four days where she grew weaker and eventually was unable to argue with her ladies in waiting who moved her to her bed. Elizabeth’s Privy Councillors gathered around her in the hope that she would finally name her successor but she was too weak to even talk. Elizabeth signalled to Robert Cecil who understood that it was a sign to name James VI of Scotland as her successor.

Archbishop Whitgift was called to the Queen’s bedside to offer prayers and Elizabeth slowly drifted into sleep and never awoke finally passing away on March 24th. A proclamation was issued to declare Elizabeth’s death and the succession of James VI of Scotland. Due to the way the Elizabethans still followed the Julian calendar Elizabeth actually died on the last day of 1602, with each New Year taking place on 25th March. A new year for a new ruling dynasty.

Elizabeth’s cause of death was never known as no post mortem was carried out however two theories of her death were simply old age or blood poisoning caused by the white lead and vinegar mixture she used upon her skin.

Elizabeth was laid to rest of 28th April 1608 in Westminster Abbey.

Under her leadership England advanced significantly in the Arts through the works of William Shakespeare, Christopher Marlowe and John Donne. England also explored many new lands through Sir Francis Drake, Sir Walter Raleigh and Sir Richard Greenville. She also successfully saw off many attempts of invasion from the Spanish. The death of Elizabeth saw the end of the Tudors and she left England in a better place than when she took the throne. 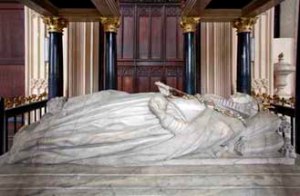 Tomb of Queen Elizabeth I at Westminster Abbey.