Sir Walter Raleigh was granted a charter by Queen Elizabeth I to colonise an area of North America. The charter specified that a colony was to be established or Raleigh would lose his rights to colonisation.

Elizabeth intended that the venture would bring many treasures and would allow the British to establish a base which they would use to send ships to raid the Spanish ships that were carrying treasure.

By April 1584 Raleigh had set out on expedition and by July a new colony was founded at Roanoke, Virginia to learn their ways and the geography of the area.

All appears to have gone well so a second expedition was arranged led by Sir Richard Grenville in order to gain military and scientific knowledge. Five ships set out from Plymouth but storms meant that one ship, the Tiger, was separated from the others and docked in Puerto Rico. The Tiger set off for Roanoake again on June 7th and slowly began meeting up with other ships from the expedition. On the way the Tiger struck a shoal and much of the food was ruined but still they landed in August 1585 where 107 men disembarked with a promise that Grenville would return in the following April with more men and food supplies.

Grenville’s promised date on which he would return passed and attacks began taking place upon the fort on the island. Sir Francis Drake on his way home from the Caribbean stopped at Roanoake and offered to take the men home. Grenville’s fleet arrived shortly after Drake’s departure with the promising men and food. A small amount of men stayed behind to protect Sir Walter Raleigh’s claim to Roanoake. 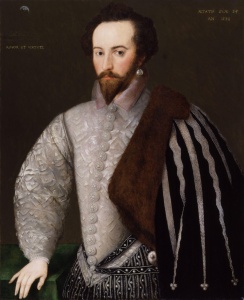