William Dacre was born on 29th April 1500 to Thomas, Lord Dacre, and his wife Elizabeth Greystoke. Dacre in 1516 became 7th Baron Greystock and in 1525 3rd Baron Dacre after his parent’s death. With the death of his father Dacre also inherited vast lands in Cumberland, Northumberland and Yorkshire.

Dacre married Lady Elizabeth Talbot; the date of the marriage is unknown but believed to have been taken place before 1527.

In 1525 Dacre was serving as captain of Norham and Carlisle when Henry VIII gave the positions to the Earl of Cumberland. Dacre refused to surrender Carlisle Castle and the lands associated with the ward and so Cumberland found it difficult to rule in the county without Dacre. In 1527 Henry VIII finally gave Dacre the position he felt he was owed. Taking control of the ward was not as simple as Cumberland retained Carlisle Castle until 1529.

Dacre held many positions in the North during his life including Steward of Penrith, Warden of the West Marches and Governor of Carlisle.

Dacre did not do anything to stay away from controversy when in 1534 he was accused of holding talks across the border with some Scots during the time of war. As a result a charge of treason was placed upon him and on 15th May 1534 Dacre was taken to the Tower of London where he was tried in Westminster Hall. Dacre defended himself to the judges for several hours and he was acquitted but fined £10,000 by Henry VIII.

With a heavy fine Dacre headed back North where trouble found him again in October 1536 when the Pilgrimage of Grace began to rise. Dacre was approached to lead the rebellion instead Dacre rode to Naworth when he left in November his tenants joined the cause of the Pilgrimage. In February 1537 Dacre again headed north when he was informed of the siege of Carlisle by the Pilgrims but learnt on arrival that his uncle, Sir Christopher Dacre, had dealt with the siege.

Dacre’s loyalty was rewarded by King Henry VIII when he was appointed to the council in the north. The reappointment of the wards was opposed by the Duke of Norfolk who felt that Dacre’s appointment would cause the feud with Cumberland to reignite and so they passed to Sir Thomas Wharton. Dacre was offered keeper of Tynedale, which he refused as he felt it an insult. Dacre was reported to have said that ‘he had rather loose one finger of every hande then to medle therwith’. As a result Henry refused to grant Lanercost Priory to Dacre during the dissolution of the monasteries.

During King Edward VI’s reign Dacre actively spoke out against the Book of Common Prayer and oppose a bill that would allow the clergy to marry. As Dacre stood protecting the north of the country against the Scottish he had some persuasion in the reformation of the country. However, when John Dudley, Duke of Northumberland, was appointed Protector he swiftly made peace with Scotland and the reformation picked up its pace. As a result Dacre would again lose his wardenship.

With the death of the King, Dacre threw his support against Mary, a fellow Catholic. With Mary succeeding over Lady Jane Grey she was quick to restore Dacre to his former posting as a reward for his support.

With Mary’s death and the countries return to Protestantism Dacre saw him once again lose his wardenship under the new Queen Elizabeth.

In November 1563 Dacre fell ill at Kirkoswald and three days later died. He was buried in Carlisle Cathedral on 14th December following a traditional Catholic procession and burial. 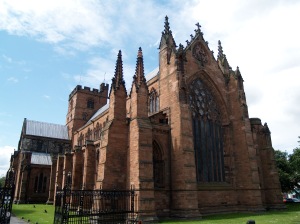