Following the execution of Anne Boleyn and her brother George at the hands of King Henry VIII, their father on 29th June 1536 was stripped of his office of Lord Privy Seal. This was a position he had held since January 1530 after Cardinal Wolsey’s fall from grace.

On 2nd July 1536 Henry appointed Thomas Cromwell to the vacant position as well as being created Baron Cromwell of Wimbledon just days later. Cromwell’s rise to power was not to everyone’s liking he was seen by many as just a blacksmith’s son and had no right at court, however, Henry regarded him as one of his most trusted aides.

The Lord Privy Seal is a lower rank to that of President of the Privy Council and the Lord Chancellor but it is a role that has great honour despite the fact it is an almost entirely ceremonial role. The Lord Privy Seal is the bearer of the King’s personal seal and has access to the King and council’s documents. Cromwell would have also have had unrestricted access to Henry as well. 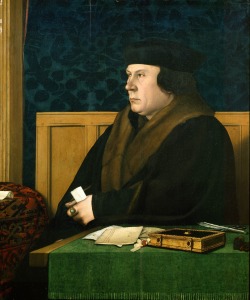