On 28th June 1491 the future King Henry VIII was born in the manor house of Placentia, Greenwich. A small country manor house within the vicinity of Greenwich Palace. It was a far less significant birth to his older brother, Arthur, who was the Prince of Wales and the heir to the throne. Henry’s birth was largely less important as he was viewed as ‘the spare’

On 28th June Elizabeth gave birth to her second son. Henry would have been taken by his nurses and bathed in various substances including milk, sweet butter and barley water amongst others in the hope of preventing death before the infant was baptised.

Henry’s birth was less significant compared to his elder brother and sister. Very few records exist of Henry’s birth and even his paternal grandmother, Margaret Beaufort, only wrote a small note in her Book of Hours when she had wrote dates and times for Arthur. Henry was destining for a quiet life as the spare.

Henry was baptised in Greenwich Church of the Observant Friars where Richard Foxe, Bishop of Exeter presided over the service. The church was lavishly decorated with tapestries, damask and cloth of gold and a wooden stage was built where the Canterbury silver font was placed. Now baptised Henry would soon be sent to Eltham where he would join his sister in the royal nursery. Just 11 years later Henry would suddenly find himself the new heir to the throne after the unexpected death of his older brother and with that Henry was catapulted into a life that would lead him to be King.

This bust is believed to be Henry VIII as a child

On 21st April 1509 King Henry VII, the first monarch of the House of Tudor died. 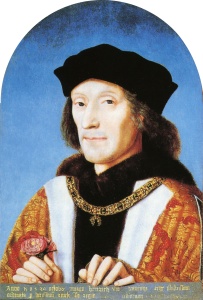 Henry won the throne from King Richard III at the Battle of Bosworth in 1485 and by marrying Elizabeth of York he united the houses of York and Lancaster bringing an end to civil unrest. Henry restored political stability to England as well as many administrative, economic and diplomatic advances. However, Henry’s final years were overshadowed by his greed and unfair treatment which caused many Englishmen to be indebted to Henry. Upon his death Henry had gained a personal fortune of £1.25 million, which is the equivalent of £978 million in 2015.

Henry VII was not a military man and did not seek to gain fame on the battlefield so he signed peace treaties that ensured peace remained. Henry formed many alliances which he strengthened through marriage. His son, Arthur, was betrothed to Katherine, daughter of Queen Isabella of Catile and King Ferdinand of Aragon. Henry also married his daughter, Margaret, to King James IV of Scotland.

Although the Wars of the Roses had ended Henry still had to deal with rebellions from those loyal to the former King as well as pretenders to the throne most notably Lambert Simnel and Perkin Warbeck who both claimed to be the rightful heirs to the throne.

King Henry’s wife, Elizabeth, died in 1503 during childbirth and Henry attempted to negotiate a new marriage and even briefly considered marrying Katherine of Aragon, the widow of his son and heir Arthur. However, neither this nor any other women that was considered ended up being the new queen of England. After the death Elizabeth, Henry fell ill and would only allow his mother, Margaret Beaufort, to attend him. The Tower of London was not used again as a residential palace by Henry and even his son used other palaces in London for the births of his children. It appears then that the death of the Queen affected both her husband and son deeply.

The last couple of years of Henry’s reign he had been ill many times however, in February 1509 he became ill once again and this time it was likely he would die. On the evening of 20th April Henry summoned his confessor to administer the last rites. He knew his time was coming to an end. His confessor anointed Henry with the holy oil and performed mass.

King Henry VII died at Richmond Palace at 11pm on 21st April 1509 of turberculosis. He was buried at Westminster Abbey next to his wife in the chapel that he commissioned. His son Henry was proclaimed King on 24th April. 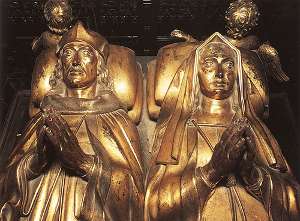 Elizabeth of York, daughter of Edward IV and mother to Henry VIII, was buried in Westminster Abbey on 23rd February 1503.

Elizabeth was betrothed to Henry Tudor whilst he was in exile planning his return to England to face Richard III. Henry defeated Richard at the Battle of Bosworth on 22nd August 1485 and was proclaimed king.

Henry took Elizabeth for his wife on 18th January 1486 with a service in Westminster Abbey. Their marriage united the Houses of York and Lancashire and ended the Wars of the Roses.

Elizabeth died on 11th February 1503 on her 37th birthday, days after giving birth to a daughter, Katherine, who unfortunately also died just a few days after being born. After her death Elizabeth lay in state at the Chapel of St. Peter ad Vincula in the Tower of London before being interred to Westminster Abbey. Henry VII gave his wife a magnificent state funeral and spared no expense.

Elizabeth’s funeral procession began on 22nd February and was led by 200 men and women dressed in black and carrying torches. Behind them followed Elizabeth’s household members and clerics and then came Elizabeth’s coffin on a horsedrawn carriage accompanied by knights and nobles.

Behind the carriage were the Queen’s four sisters on horseback with four other noblewomen in single file each escorted by a gentleman dressed in black damansk. The procession was followed further by noblewomen and members of the royal household.

Following a night resting within the Abbey, masses were said with the Bishop of Lincoln presiding over the final requiem mass. When all the sermons and masses were over the Bishop of London sanctified the grave for the coffin to be lowered into the ground. The Queen’s chamberlain and gentlemen ushers broke their staffs of offie and threw them into the grave to signify the end of their employment in her name.

Henry VII declared that every 11th February a requiem mass was to be sung, bells tolled and 100 candles lit in honour of his Queen.

Work on the Tudor vault in Westminster Abbey had only just begun at the time of Elizabeth’s death and so she could not be interred here, instead she was temporarily laid to rest in a specially built vault made just for her between the high altar and the choir in the Abbey. It was only after the death of Henry VII in 1509 that she was re-interred to her final resting place in the Lady Chapel. 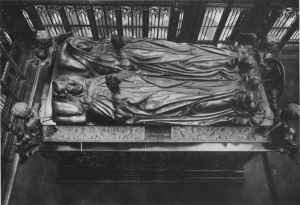