After being named as King Edward VI’s successor Lady Jane Grey was taken to the Tower of London on 10th July 1553 in order to be proclaimed Queen.

Lady Jane Grey arrived by barge and was accompanied by her husband, her parents and her husband’s mother. They had travelled from Syon and were greeted by Jane’s father in law, the Duke of Northumberland and councillors who escorted them into the Tower.

According to ‘The Chronicle of Queen Jane and of Two Years of Queen Mary’;

“The 10 of July, in the afternoone, about 3 of the clocke, lady Jane was convayed by water to the Tower of London, and there received as queene. After five of the clocke, the same afternoone, was proclamation made of the death of king Edward the sixt, and how hee had ordained by his letters patent bearing sate the 21. Of June last past that the lady Jane should be heire to the Crowne of England, and the heire males of her body.”

As Jane and her husband, Guildford, walked under the a canopy and upon reaching the Tower trumpets and a gun salute were used to silence the crowd and then two heralds proclaimed that Jane was the new Queen of England. Anyone disagreeing with this was found and punished as was noted by Henry Machyn who wrote in his diary what happened to one boy who supported Mary;

“The xj day of July, at viij of the cloke in the mornyng, the yonge man for spkyng was sett on the pelere, and boyth ys heres (ears) cutt off; for ther was a Harold, and a trumpeter blohyn; and contenent he was taken downe.”

Upon arrival at the Tower it is believed that Jane felt faint trying on the crown as well as argued with her husband and his mother after she declared that she would not make him joint monarch but instead the Duke of Clarence. It was later in the evening that the letter from Mary arrived addressed to the Council declaring herself as Queen.

Just a few short days later Mary would be proclaimed the rightful Queen.

After King Edward VI’s death the country was left unsure of its future, the young King had declared just days before his death that he wished his cousin Lady Jane Grey to succeed to the throne upon his death, however, this contradicted his fathers, King Henry VIII, Third Act of Succession which declared if Edward died with no children then the throne would go to the Lady Mary, Henry’s daughter with Katherine of Aragon.

Mary had been informed of her half brother’s death on 7th July 1553 at Euston Hall, Thetford where she was staying with Lady Burgh. Mary travelled to her home at Kenninghall, Norfolk and declared to her household that the King had died and therefore “the right to the crown of England had therefore descended to her by divine and by human law.” Her household proclaimed Mary Queen of England, unaware of what Edward had done to alter the line of succession.

With the belief that Mary was the rightful Queen she wrote to the Privy Council informing them that she was to be recognised as Queen and to “casue our right and title to the crown and government of this realm to be proclaimed in our city of London and other places as your wisdom shall seem good.”

Little did Mary know that she would have to fight for her crown over the coming days. 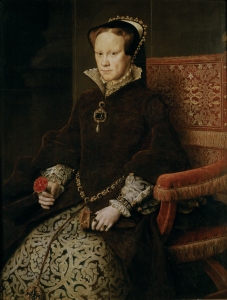 On 25th May 1553 Lady Jane Grey was married to Guilford Dudley. Jane would have been around 16 years old at the time of her wedding and although there is no exact birth year for Guilford it is believed he was around the same age.

The wedding was attended by almost all English nobility with the exception of the King, who was ill and unlikely to live. The marriage was partly of convenience with the King dangerously ill; John Dudley feared that his position would be in danger if either Mary or Elizabeth took the throne so he moved to secure his position. The Dudley’s and Grey’s moved to arrange the marriages of their children. With Jane having a strong claim to the throne the Dudley’s arranged to marry her to their only unwed child, Guilford.

At the same time a two offer weddings took place between Katherine Dudley and Lord Henry Herbert and Lady Katherine Grey and Lord Henry Hastings. Each couple were dressed in silver and gold during the ceremony, as the weddings were rushed the outfits were borrowed from the Master of the Wardrobe.

In a letter from Jehan Scheyfve to the Emperor it was written;

With the death of King Edward VI, Jane was proclaimed Queen in place of Mary and was taken to the Tower of London to prepare for her coronation alongside her husband. Jane was unwilling to take the crown and was noted as saying; ‘The crown is not my right, and pleaseth me not. The Lady Mary is the rightful heir’.

Jane, Guilford and her family were all arrested upon Mary’s arrival in the city and imprisoned in the Tower of London where they awaited trial and eventually the executioner’s block. Jane would be known as the nine day Queen. 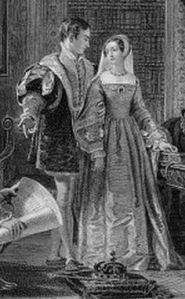 Sir John Russell was born in 1485 in Dorset to James Russell and his first wife Alice Wise.

Sir John had a very successful career at court and held many high ranking offices. He first came to the attention of the Tudor court in 1506 when Archduke Philip of Austria and Juana, the King and Queen of Castile. Juana was also the sister of the dowager Princess of Wales, Katherine of Aragon. The Spanish monarchs had been shipwrecked off the coast of Weymouth on a diplomatic trip to visit King Henry VII. As a result of their detour, Russell escorted them to London to complete their journey. Philip and Juana highly praised Russell and the service that he provided to them to King Henry VII, who in 1507 made Russell a Gentleman of the Privy Chamber. A position he held after King Henry VIII ascended the throne.

Russell went on to loyally serve Henry VIII’s court. Russell was involved in the War of the League of Cambrai (also known as the War of the Holy League) and he was present at the taking of Tournai and Thérouanne. Russell was knighted by Henry VIII in 1522 after losing an eye in battle in Brittany.

Sir John Russell help a wide range of posts in the Tudor court from serving as High Sheriff of Dorset and Somerset in 1528 and acting as a Member of Parliament for Buckinghamshire between 1529 and 1536.

After the downfall of Anne Boleyn and her family in 1536. Russell was made a Privy councillor and helped suppress the rebellion of the Pilgrimage of Grace in autumn 1536. Russell also benefitted greatly from the downfall of another courtier, Henry Courtenay, 1st Marquess of Exeter. After Courtenay’s execution Russell was made a Baron and Lord President of the Council in the West. This was quickly followed by being invested in to the Knight of the Garter. Finally in 1539 Russell was made High Steward of Cornwall and Lord Warden of the Stannaries.

During Henry VIII’s Dissolution of the Monasteries Russell was granted many lands, these included Tavistock Abbey and Plympton Abbey in Devon, making him the largest land owner in Devon. Russell was also granted Blackfriars in Exeter where he later built Bedford House. Russell was also granted lands in London, including the kitchen garden of Westminster Palace. In the modern day this is now the site of the busy Covent Garden.

In 1540 Russell was made Lord High Admiral. At this point he had a very close relationship with Henry VIII. The day after Henry met Anne of Cleves for the first time Henry asked Russell whether he thought Anne to be fair. Russell replied that he found her “not to be fair, but of a brown complexion”. An answer which probably saved Russell when Henry was trying to find ways out of his marriage.

In 1542 Russell resigned from his position as Lord High Admiral and was elevated to the role of Lord Privy Seal. One of the highest positions within the council. Russell remained close to Henry VIII throughout the King’s final years. He was entrusted as one of the executors of Henry’s will and was appointed one of the 16 councillors that help rule the country during the new King, Edward VI’s, minority. Russell also acted as Lord High Steward at the coronation of the young King, who in return elevated him to the title of Earl of Bedford in 1550 and in 1552 Lord Lieutenant of Devon.

In the final days of the young King on 16th June 1553 Russell was one of the 26 peers who signed a settlement of the crown on Lady Jane Grey, ensuring that she would be Edward’s heir and not his sister Mary as was expected due to Henry VIII’s final Act of Succession.

Sir John Russell died on 14th March 1555 and was buried in the Bedford Chapel in the church that lies next to Chenies Manor House, his ancestral home. 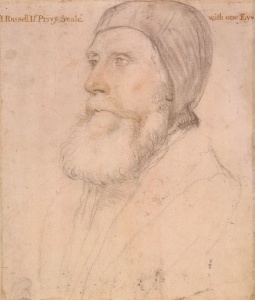