On 19th October 1536 King Henry VIII wrote to the Duke of Suffolk, Charles Brandon, regarding the Pilgrimage of Grace rebels he wrote;

“You are to use all dexterity in getting the harness and weapons of the said rebels brought in to Lincoln or other sure places, and cause all the boats on the Humber or means of passage into Yorkshire to be taken up. After this, if it appear to you by due proof that the rebels have since their retires from Lincoln attempted any new rebellion, you shall, with your forces run upon them and with all extremity ‘destroy, burn, and kill man, woman, and child the terrible example of all others, and specially the town of Louth because to this rebellion took his beginning in the same.’ We have sent you this day a good sum of money, and will send more as required.”

Henry also wrote to the Earl of Derby on the same day;

“We lately commanded you to make ready your forces and go to the earl of Shrewsbury, our lieutenant to suppress the rebellion in the North; but having since heard of an insurrection attempted about the abbey of Salley in Lancashire, where the abbot and monks have been restored by the traitors, we now desire you immediately to repress it, to apprehend the captains and either have them immediately executed as traitors or sent up to us. We leave it, however, to your discretion to go elsewhere in case of greater emergency. You are to take the said abbot and monks forth with violence and have them hanged without delay in their monks’ apparel, and see that no town or village begin to assemble.”

Henry wanted the rebellion dealt with swiftly and effectively in order to stop anymore uprisings. His message to Brandon was clear.

The badge worn by the Pilgrimage of Grace rebels

Charles Brandon was born in 1484 to Sir William Brandon and Elizabeth Bruyn. Brandon’s father, William was the standard bearer for King Henry VII and was killed at the Battle of Bosworth. As a result of his father’s death Charles was brought up at the court of the new King and at a young age became friends with Prince Henry.

Brandon married Margaret Neville, a widower some 20 years his senior but by 1507 the marriage was declared void firstly by the Archdeaconry Court of London and then later by a papal bull that was issued on 12th May 1528. The following year Brandon went on to marry Anne Browne, Margaret’s niece, in a secret ceremony at Stepney with a public ceremony taking place at St Michael’s, Cornhill. The couple went on to have two daughters; Anne and Mary. Unfortunately Brandon’s wife would die just three years later in 1511.

With King Henry VIII succeeding the throne, Brandon found himself in a position of power as he remained a close friend and confidante to the new King and as a result held a number of positions within the court. In 1513 Brandon was given the position of Master of the Horse and also many lands that were considered highly valuable. Brandon was also present at the sieges of Thérouanne and Tournai during the War of the League of Cambrai and at the time Henry was pushing Margaret of Savoy to marry Brandon to strengthen their union. Henry also created Brandon the Duke of Suffolk.

Henry’s plan to marry Margaret of Savoy and Brandon did not work as also in 1513 Brandon was contracted to marry Elizabeth Grey, 5th Baroness Lisle and on 15th May 1513 was granted the title of 1st Viscount Lisle as a result of his forthcoming, however, Brandon did not go through with the marriage as a result of marrying the King’s sister, Mary, after the death of her first husband – the King of France. Brandon was forced to give up the title of Viscount Lisle.

Brandon and Princess Mary, Henry’s sister, married in secret in France after Brandon was sent to escort the Dowager Queen home following the death of her husband King Louis XII. The new King, Francis, encouraged the marriage in an attempt to not return Mary’s plate and jewels to England. The pair married in private on 5th March 1515 before setting off from France to return to England. Upon their arrival back in London Brandon confided in Cardinal Wolsey regarding his new marriage to the King’s sister.

Without Cardinal Wolsey we do not know how King Henry would have reacted but Wolsey was able to calm the angered King and the couple were ordered to pay Henry £24,000 in yearly instalments of £1,000 as well as Mary’s dowry from Louis which totalled £200,000 alongside the gold plate and jewels that the old King of France had promised to Mary. The couple were married at Greenwich Hall on 13th May after the papal bull was secure to declare Brandon’s first marriage officially void.

Brandon and Mary retired to the countryside for some years to avoid the King’s anger, however, Brandon was present at the Field of the Cloth of Gold in 1520 and in 1523 he was sent to Calais to oversee the English troops stationed there. Brandon and Mary would have two sons and two daughters, with his daughter Frances giving birth to Lady Jane Grey.

Charles Brandon returned to Henry’s court and his influence with the King increase following the fall of Cardinal Wolsey. Brandon along with Thomas Howard, Duke of Norfolk was sent to demand the return of the Great Seal from Wolsey. Brandon was also instructed to convey to Katherine of Aragon news that Henry had married Anne Boleyn and that she was to now be referred to as Dowager Princess.

Mary died on 25th June 1533 and in the same year Brandon married his 14 year old ward, Catherine Willoughby. Catherine was originally betrothed to Brandon’s son Henry but Brandon believed he was too young to marry and so in order not to lose Catherine’s lands he married her himself . Catherine and Brandon would have two sons together, Henry and Charles; they died from the sweating sickness at a young age.

Brandon supported Henry’s plans during the dissolution of the monasteries and was in receipt of many lands and in 1544 Brandon once again led the English army as they prepared for an invasion of France.

Charles Brandon died on 22nd August 1545 aged 61 at Guildford, Surrey and was buried at St George’s Chapel, Windsor with Henry VIII covering the costs of the funeral. Brandon had requested a quiet funeral but Henry wanted to honour his close friend, Brandon’s death hit Henry hard as he had lost his longest companion and he himself would die less than 18 months later.

Upon their father’s death Henry succeeded him as 2nd Duke of Suffolk on 22nd August 1545 but due to their ages, Henry was 15 and Charles was 14, instead of taking up the role that was expected of him the two young boys continued their studies at St John’s College, Cambridge. When the sweating sickness broke out across the country they were sent to the countryside.

Sweating sickness was strike fast and the symptoms would appear suddenly. Symptoms included cold shivers, headache and exhaustion. Once the fever took a hold of the body sweating, delirium and a rapid pulse would manifest before the infected would eventually collapse with exhaustion and fall into a need for sleeping. The disease could kill within hours of the symptoms making themselves known.

The two young boys were staying at the Bishop of Lincoln’s Palace in Buckden in Huntingdon when they were taken ill and on 14th July 1551 they succumbed to the sweating sickness and died within an hour of each other. Henry died first and therefore passed the title of Duke of Suffolk to his younger brother who held the title for just one hour. Their mother had been staying nearby reached the house just before the youngest Brandon passed away.

They were buried at Buckden privately before a requiem mass was held on 22nd September which would be called “A Month’s Mind”. John Strype wrote;

“it was performed with two standards, two banners, great and large, ten bannerols, with divers coats of arms; two helmets, two swords, two targets crowned, two coats of arms; two crests, and ten dozen of escutcheons crowned; with lamentation that so noble a stock was extinct in them.” 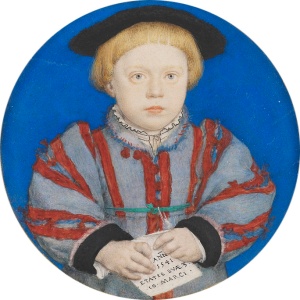 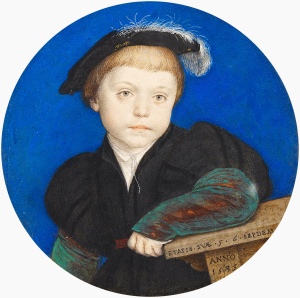 Painted by Hans Holbein the Younger