The celebrations spared no expense as Henry could finally celebrate the birth of a legitimate son. A procession left the Queen’s apartments to take the new born Prince to the Chapel Royal where in front of a large crowd Archbishop Cranmer performed the baptism. Edward’s sister, Elizabeth, carried the chrisom cloth with the aid of his uncle, Edward Seymour. Princess Mary acted as godmother whilst Thomas Howard, Duke of Norfolk, Charles Brandon, Duke of Suffolk and Archbishop Cranmer acted as godfathers.

In the Letters and Papers, Foreign and Domestic, Henry VIII documented in details the events of the day.

“The preparations ordained for the said christening at Hampton Court.” Describing minutely the course of the 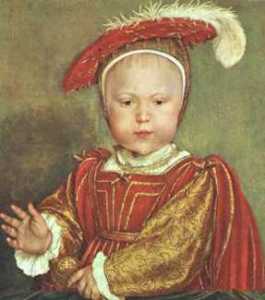 procession and the decorations of the chapel, with the positions occupied by the officers of the household (Sir John Russell, Sir Fras. Bryan, Sir Nic. Carew and Sir Ant. Browne in aprons and towels were to take charge of the font until discharged by the lord Steward, or, in his absence, the Treasurer of the Household). The order of going to the christening was: First, certain gentlemen two and two bearing torches not lighted until the prince be Christened. Then the children and ministers of the King’s chapel, with the dean, “not singing going outward.” Gentlemen esquires and knights two and two. Chaplains of dignity two and two. Abbots and bishops. The King’s councillors. Lords two and two. The comptroller and treasurer of the Household. The ambassador. The three lords chamberlains and the lord Chamberlain of England in the midst. The lord Cromwell, being lord Privy Seal, and the lord Chancellor. The duke of Norfolk and abp. Of Canterbury. A pair of covered basins borne by the earl of Sussex, supported by the lord Montague. A “taper of virgin wax borne by the earl of Wiltshire in a towel about his neck.” A salt of gold similarly borne by the earl of Essex. “Then the crysome richly garnished borne by the lady Elizabeth, the King’s daughter: the same lady for her tender age was borne by the viscount Beauchamp with the assistance of the lord.” Then the Prince borne under the canopy by the lady marquis of Exeter, assisted by the duke of Suffolk and the marquis her husband. The lady mistress went between the prince and the supporter. The train of the Prince’s robe borne by the earl of Arundel and sustained by the lord William Howard.” “The nurse to go equally with the supporter of the train, and with her the midwife.” The canopy over the Prince borne by Sir Edw. Nevyll, Sir John Wallop, Ric. Long, Thomas Semere, Henry Knyvet, and Mr. Ratclif, of the Privy Chamber. The “tortayes” of virgin wax borne about the canopy my lady Mary, being lady godmother, her train borne by lady Kingston. All the other ladies of honour in their degrees.

When the Prince was christened all the torches were lighted and Garter King at Arms proclaimed his name (proclamation verbatim, titles duke of Cornwall and earl of Chester). “This done, this service following was in time the Prince was making ready in his traverse, and Te Deum sung”:- First, to the lady Mary the lord William to give the towel and the lord Fytzwater to bear covered basins, and the lord Montagew to uncover. Item, to the bishop that doth administer, the lord Butler to bear the towel, the lord Bray to bear the basins and the lord Delaware to uncover. To the duke of Norfolk and abp. Of Canterbury, godfathers, the lord Sturton to bear the towel and the lord Went worth to give the water. To serve the ladies Mary and Elizabeth with spices, wafers, and wine: the lord Hastings to bear the cup to lady Mary, and the lord Delaware that to lady Elizabeth; lord Dacres of the South to bear the spice plates to both, lord Cobham the wafers, and lord Montagew to uncover the spice plate. The bishop that doth administer, the duke of Norfolk and abp. Of Canterbury, godfathers at the font, and the duke of Suffolk, godfather at the confirmation, to be likewise served by knights appointed by the lord Chamberlain. All other estates and gentles within the church were served with spice and ypocras, and all other had bread and sweet wine.

The going homeward was like the coming outward, saving that the taper, salt and basin were left and the gifts of the gossips carried, i.e. Lady Mary, a cup of gold borne by the earl of Essex; the archbishop, 3 great bowls and 2 great pots, silver and gilt, borne by the earl of Wiltshirel Norfolk, ditto, borne by the earl of Sussex; Suffolk, 2 great flagons and 2 great pots, silver and gilt, borne by Viscount Beauchamp. Lady Elizabeth went with her sister Lady Mary and Lady Herbert of Troy to bear the train. Sounding of the trumpets. Taking of “assayes.” The Prince was then borne to the King and Queen and had the blessing of God, Our Lady, and St. George, and his father and mother. And the same day the King gave great largess.”

In 2014 to celebrate the 500th anniversary of Hampton Court Palace they recreated Edward’s christening.

The future King Edward VI was born on 12th October 1537 at Hampton Court Palace, Edward was born at 2am on St Edward’s Day after Jane Seymour had endured a 30 hour labour. Following the birth church bells rang out across the country declaring the royal couples happy news meanwhile parish churches sang the Te Deum and bonfires were lit. Merchants within the cities distributed wine and fruit and German merchants also gave wine and beer to the poor. In the evening from the Tower of London 2000 rounds were fired into the sky.

Edward VI as an infant

In 2012 a letter was discovered in the archives of Dunham Massey, it was signed by Jane Seymour to Henry, although written in by another as Jane would not have been in any state to write,it was dated 12th October, therefore shortly after she had given birth to Edward. In the modern English the letter read;

Trust and well beloved, we greet you well. And forasmuch as by the inestimable goodness and grace of Almighty God, we have been delivered and brought to child-bed of a Prince conceived in most lawful matrimony between my lord, the King’s Majesty, and us, doubting not but that for the love and affection which you bear unto us and the commonwealth of this realm the knowledge of which you should be joyous and glad tidings unto you, we have thought good to certify you of the same, to the intent that you might not only render unto God condign thanks and praise for so great benefit, but also pray for the long continuance and preservation of the same here in this life to the honour of God, joy and pleasure of my lord the King and us, and the universal peace, quiet and tranquillity of this whole realm. Given under our Signet at my lord’s manor of Hampton Court, the 12th day of October.”

Henry had every reason to celebrate he had finally been delivered of the son he had always desired.

On 12th July 1543 King Henry VIII married his sixth and final wife, Katherine Parr at Hampton Court Palace. The ceremony was a private matter that took place in the Queen’s Closet within the Chapel Royal.

As a private ceremony approximately 20 people attended this included the King’s daughters, Mary and Elizabeth, Margaret Douglas, Henry niece, the Duke and Duchess of Suffolk, Viscountess Lisle, Countess of Hertford as well as Katherine’s sister and her husband, Anne and William Herbert.

Henry’s principle clerk of a court, Richard Watkins, recorded an official record of the marriage and wrote;

The week after their wedding the newly married couple set off on their first summer Progress and husband and wife.