Margaret Tudor was born on 28th November 1489 at Westminster Palace she was the oldest surviving daughter of King Henry VII and Elizabeth of York. Margaret was baptised in St. Margaret’s Church, Westminster.
As Margaret approached the age of six her father began to consider a marriage match between Margaret and the King James IV of Scotland in an attempt to secure a Scottish alliance and end the support that James had been giving Perkin Warbeck, pretender to the English throne. The union was unpopular and the Italian historian, Polydore Vergil recorded that some of the council were concerned that it would bring the Scottish into the English succession. King Henry VII replied;
“What then? Should anything of the kind happen (and God avert the omen), I foresee that our realm would suffer no harm, since England would not be absorbed by Scotland, but rather Scotland by England, being the noblest head of the entire island, since there is always less glory and honour in being joined to that which is far the greater, just as Normandy once came under the rule and power of our ancestors the English.”
On 24th January 1502 the Treaty of Perpetual Peace was signed between the two countries and the marriage treaty was concluded on the same day. On 25th January 1503 the marriage was completed by proxy in the Queen’s great chamber at Richmond Palace with the Earl of Bothwell standing in for the Scottish King. Bothwell wore a gown made of cloth of gold and was accompanied by the Archbishop of Glasgow and the Postulate of Moray, Andrew Forman. Margaret was now considered the Queen of Scotland.
Now the Queen of Scotland, Margaret was provided a large wardrobe of clothes befitting her new status as well as state bed curtains made of crimson Italian silk embroidered with the Lancastrian red rose. In May 1503 King James confirmed that Margaret’s lands in Scotland would comprise of; Methven Castle, Doune Castle, Newark Castle, Linlithgow Palace and Stirling Castle as well as any income from the Earldom and Lordships of her land.
Margaret set of for her new life in Scotland on 27th June 1503 and was accompanied by an impressive progress that was led by King Henry VII until Collyweston. On 1st August Margaret was met by the Scottish court at Lamberton. On 4th August Margaret was comforted by her new husband after a fire broke out in the stables at Dalkeith Palace, which resulted in the death of some of her favourite horses. Just three days later on 7th August Margaret was carried in a litter from Dalkeith to Edinburgh.
The following day the marriage was celebrated in Holyrood Abbey with both Margaret and James present. The ceremony was presided over by the Archbishop of Glasgow and the Archbishop of York. Now officially married to James, Margaret undertook her first public engagement just two days later when she went to mass at St. Giles’ Cathedral. The couple would go on to have six children although only one survived infancy, the future King James V. 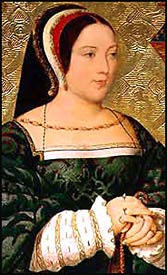 With Margaret’s brother, King Henry VIII, now on the throne of England the Treaty of Perpetual Peace soon broke down and with Henry away fighting in France, Scotland invaded England resulting in the death of King James IV. In his will he named Margaret as regent for their son, for as long as she remained a widow.
Margaret, now in charge of the country ruling in her infant son’s name soon came up against opposition, not only was she a women she was also the sister to their enemy and cries for her replacement soon began. The figurehead of their campaign was John Stewart, 2nd Duke of Albany, the closest living male relative to the young King. Margaret was able to calm the calls for her to stand down and reunited the Scottish council; however, as she was doing that she turned to the House of Douglas for support and secretly married Archibald Douglas, 6th Earl of Angus near Perth on 6th August 1514.

Now no longer a widow by the end of August 1514 Margaret consented to the appointment of the Duke of Albany as the new regent of the country. The Scottish council also declared that with her new marriage she had also given up the rights to supervise her sons. In defiance to the ruling Margaret gathered her sons and fled to Stirling Castle. Margaret eventually surrendered her sons the following August to Albany, by now she was expecting another child with Douglas and they retired to Edinburgh.
Margaret obtained permission from the council to travel to Linlithgow and from there she fled back into England where she was greeted by Lord Dacre and was escorted to Harbottle Castle where she gave birth to her daughter, Lady Margaret Douglas. During her time at Harbottle Margaret was informed of the death of her youngest son, Alexander. It was also during this time that the relationship between Margaret and Douglas began to break down with Douglas returning to Scotland in an attempt to make peace with Albany and protect his lands, as outside of Scotland he had no real power.
Margaret, with her new born child, travelled on to London and the court of her brother, King Henry VIII, she was housed in Scotland Yard, the London residence of Scottish kings. A year later, in 1517, Margaret returned to Scotland following a new treaty between Albany, Henry and Cardinal Wolsey. The Dowager Queen of Scotland was met at the border by Sieur de la Bastie, Albany’s deputy and her husband. Shortly after returning to Scotland Margaret had discovered that her husband had been living with a former mistress, Lady Jane Stewart, in her home and using her money. In October 1518 Margaret wrote to her brother regarding the possibility of a divorce. Henry was strongly against the divorce on religious beliefs (this was before his own divorce to Katherine of Aragon) as well as the fact that Angus was an ally worth holding on to.
Margaret began to work closely with Albany and when Albany returned to Scotland in November 1521 they set about restoring order to Scotland. Angus by now had gone into exile and began to spread rumours regarding the relationship between Margaret and the Regent. However, in 1524, Margaret showed that her alliance with Albany was just political when she formed a party that set about removing the Regent altogether with the help of Arran and the Hamiltons, Margaret brought her son, King James V, to her in Edinburgh and it was declared that now James was 12 years of age he was able to rule in his own name and was granted full powers. In November of the same year Margaret was recognised by Parliament as the chief councillor to the King.
Angus returned from exile and the relationship broke down between Margaret and Angus so much that upon entering Edinburgh Margaret ordered cannons to be fired at him from both Edinburgh Castle and Holyrood House. He was finally admitted to the council in February 1525 where he seized custody of the King and held him for three years.
Margaret did all she could to resist the Angus’ attempts to rule through James and despite her previous coup remained in friendly contact with Albany who was in Rome working on achieving her divorce from Angus. Pope Clement VII granted the divorce in March 1527 but she was unaware of this until December of that year.
On 3rd March 1528 Margaret married for a third time to Henry Stewart. In June 1528 Margaret’s son, King James, was finally able to free himself from Angus and began ruling in his own name. James created his new step father Lord Methven and they became some of the leading advisors to the King. One of Margaret’s main aims was to bring about a stronger relationship between Scotland and England and attempted to arrange a meeting between James and Henry. Margaret wanted an event similar to the Field of Cloth of Gold but it never came to fruition as James refused to be ruled by others and was suspicious of Henry.
Margaret once again sought divorce from her latest husband and even attempted to flee back to England before she was intercepted and escorted back to Edinburgh. She would write to Henry complaining of poverty and sought his protection against her husband. In June 1538 Margaret welcomed her daughter in law, Mary of Guise, to Scotland. The two would have a good relationship and Mary ensured her mother in law was more comfortable making regular appearances at court with her husband, with whom she had reconciled.
Margaret died at Methven Castle, Perthshire on 18th October 1541. It was reported that she suffered a palsy but expected to recover and therefore made no will. She did send for her son who was at Falkirk Palace but he failed to arrive on time. She was buried at the Carthusian Priory of St John in Perth. 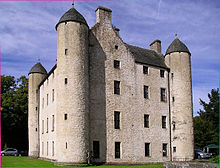 In 1515, Margaret Douglas was born to Archibald Douglas, 6th Earl of Angus, and Margaret Tudor, the Dowager Queen of Scotland. Therefore making the younger Margaret niece to the reigning Henry VIII.

Margaret’s relationship was not easy going with the King of England. She twice incurred his wrath due to her personal relationships. The first time was due to her unauthorised engagement to Lord Thomas Howard, who in 1537 died imprisoned in the Tower of London. The second time was due to an affair with the brother of the current Queen, Catherine Howard. Margaret was finally and legally married in 1544 when she became the wife of Matthew Stuart, 4th Earl of Lennox.

Upon the ascension of Elizabeth I, she roused suspicion when she negotiated the marriage of her son Henry to Mary, Queen of Scots. This strengthened their claim to the English throne and it probably worried Elizabeth as it was a cause for rebels to focus on. Henry and Mary had one son, James. He later became James I of England after Elizabeth’s death.

Margaret died on 9th March 1578, from unknown causes. Rumours at the time suggested that she had dined with Robert Dudley, Earl of Leicester, just days before she was taken ill and that she had been poisoned. Was this a suggestion that the Queen was involved in order to suppress any further rebellions? There was never any evidence of this and so it shall be left as rumour. 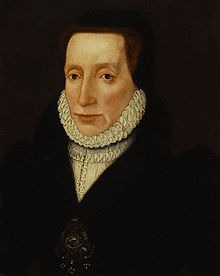 Elizabeth I provided Margaret with a grand funeral in Westminster Abbey and she is buried sharing a grave with her other son, Charles in Henry VII’s chapel.