Ever wondered what William Shakespeare did during ‘the lost years’, with so many theories floating around the team behind ‘Horrible Histories’ have thrown their tale into the ring. A story of love, treason and a plot to kill Queen Elizabeth writers Laurence Rickard and Ben Willbond could have taken it straight from the pages of a Shakespearean tale and who knows maybe Shakespeare did hand out flyers to make ends meet whilst dressed as a tomato.

We meet Bill (Mathew Baynton) as he is kicked out of the Tudor lute band Mortal Coil with another get famous scheme failed his wife, Anne Hathaway (Martha Howe-Douglas) declares it’s time to get a proper job and support the family. Bill has other ideas and sets off for that London with dreams of becoming a writer. Whilst in London he gets drawn into writing a play that will be the focal point of a Catholic plot and a comedy of errors ensues.

Throughout the film we meet King Philip II of Spain, Queen Elizabeth I and Christopher Marlowe, these historical figures along with Bill are brought to life on screen by the fantastic troupe of actors that have earned the title of heirs apparent to Monty Python. Helen McCrory is particularly captivating as the Virgin Queen. Baynton’s Bill and Jim Howick’s Christopher Marlowe have a great on screen relationship especially in their first meeting where Bill tries to teach Marlowe ‘your mum’ jokes. Simon Farnaby was outstanding as the Earl of Crawley….oh um sorry I mean Croydon! He reminded me of Colin Firth’s Lord Wessex from Shakespeare in Love but just slightly more hapless.

The jokes come thick and fast and there is something for children and adults alike as do the references to Shakespeare’s work, there is a great game in there to see how many you can spot! Normally with films set in historical times the accuracy and attention to detail goes out of the window however, this is not the case with Bill everything looks like it belongs in the era and the characters were spot on. It will also be educational for children who are beginning to learn about other eras.

I don’t think that I can fault Bill in the slightest the locations and costumes were stunning, the cast were hilarious and the plot provided plenty of laughs. There is something for everybody within the film and although the comedy is there in buckets there is still a lesson to be taken away at the end of the film.

I for one will watch it time and again and look forward to spotting even more references that I surely missed. I can’t wait to see what the cast and writers do next as I think Bill is the start of something great. 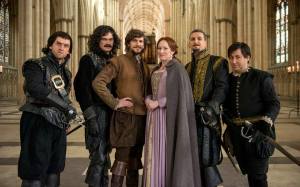