On 11th July 1564 the plague arrived in Stratford upon Avon, over 200 were buried by the end of the year which equated to around 1/5th of the town’s population.

Accusations were made against the town clerk, Richard Symonds for spreading the disease across the town by allowing his servant to run errands whilst sick, although this was never proven.

In the town records for baptisms and burials alongside the record Oliver Gunne are the words ‘hic incepit pestis’ translated to ‘Here begins the plague’. The telltale signs of the plague were noted on Gunne’s body including the black and purplish spots that were associated with the disease. Few families survived the plague intact but one family that did was the Shakespeare’s which was surprising in itself as John and Mary Shakespeare had a newborn son in the home who escaped the plague untouched, the baby would go on to be William Shakespeare.

The Shakespeare’s lived in the centre of Stratford upon Avon in Henley Street and just a few houses away their neighbours would lose four of their children to the plague. Many tried to protect their homes in order to ward of the disease by keeping their windows and doors sealed, burning dried Rosemary in a chafing dish and scattering peeled onions on the floor.

The cause of the plague is often attributed to the fleas that were carried on rodents and could strike without warning. The first sign of the plague was a swelling in the groin or armpit before spreading across the body where black and purple spots would break out before attacking the rest of the body before the victim succumbed to the disease after a few days.

As Tudor medicine was not as advanced as today’s modern medicine there was no known cure for the plague and many towns had to simply wait for the disease to pass at the toll of many deaths. 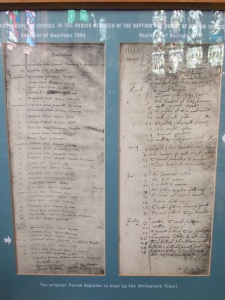