Penelope Devereux was born in January 1563 at Chartley Castle, Staffordshire to Walter Deverux and Lettice Knollys, the granddaughter of Mary Boleyn. In 1572 when Penelope was nine, her father was created Earl of Essex by Queen Elizabeth I.

Just a couple of years later, in 1575, saw the Queen visit Lady Essex as she returned from her stay at Kenilworth where she was entertained by Robert Dudley. The Queen was escorted by Sir Philip Sidney who met the 14 year old Penelope before her father died. The Earl of Essex died within a year of this visit and it is believed that he sent word to Sidney that upon his death he wished for Sidney to marry Penelope. With the death of her father Penelope and two of her siblings were sent to Henry Hastings, 3rd Earl of Huntingdon, who would now act as their guardian.

However, the match was broken two years later when Penelope’s mother married Robert Dudley, the Queen’s favourite, without permission of the Queen. This led to the family being banished from court and with it Penelope’s marriage agreement.

In January 1581, Penelope travelled to court with the Countess of Huntingdon and just two months later a new marriage match was arranged for her with Robert Rich, 3rd Baron Rich. Despite Penelope’s protests the couple were married and went on to have five children.

Although Penelope’s original marriage betrothal with Sir Philip Sidney never transpired into marriage it is widely believed that Penelope was the inspiration behind Sidney’s sonnet sequence Astrophel and Stella. Penelope was considered to be one of the beauties of the Elizabethan court with gold hair and dark eyes, not too dissimilar to Elizabeth considering they were distant cousins. Sidney was only the first to use Penelope as a muse as in 1594 an anonymous poem was published, later to be attributed to Richard Barnfield, entitled The Affectionate Shepherd was dedicated to her and also the future King James I was sent a portrait that had been painted by the Queen’s miniaturist, Nicholas Hilliard.

By 1595 Penelope had begun an affair with Charles Blount, Baron Mountjoy as she had become so unhappy in her marriage to Lord Rich.

In the Essex rebellion of 1601 Penelope was caught up in her brother’s plot with Rich denouncing her as a traitor along with Mountjoy and their children. Despite this the Queen did not take action against either and Penelope was free to have a public relationship with Mountjoy.

Upon the accession of King James I, Penelope was appointed as one of the ladies to escort Anne of Denmark as she entered London in 1603 and later served as Lady of the Bedchamber.

In 1605 Rich finally applied for a divorce to which Penelope publicly admitted adultery with Mountjoy. She had hoped that with the divorce she would be granted permission to marry Mountjoy and legitimise their children. Despite having no permission the couple went ahead and married in a private ceremony held by William Laud on 26th December 1605 at Wanstead House, London. They would be banished from court for this defiance of the King’s wishes.

Mountjoy would die just a few months later; his will would be contested after many arguments regarding his new wife and their children. Penelope was brought before the Star Chamber on charges of fraud and accusations of adultery. The charges were refuted but before a settlement could be reached on 7th July 1607 Penelope died of unknown causes and was buried in an unmarked grave in a London church. 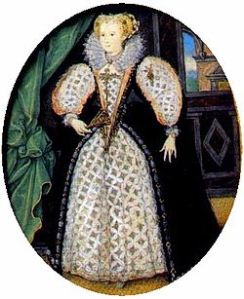 Robert Cecil was born in 1563 and was the son of William Cecil, 1st Baron Burghley and Mildred Cooke.

Cecil attended St John’s College in Cambridge during the 1580’s but he did not undertake a degree and in 1584 and 1586 he sat representing Westminster and Hertfordshire from 1589 at the House of Commons.

In 1588 Cecil joined Henry Stanley, Earl of Derby, in a diplomatic mission to the Spanish Netherlands to negotiate peace with Spain. This trip was unsuccessful and peace was not reached.

In 1589 Cecil married Elizabeth Brooke and the couple had a son, named William, in March 1591. His wife died when their son was six years old. The couple also had a daughter, Frances.

In 1590 Cecil took on the role of Secretary of State following the death of Sir Francis Walsingham. In 1591 Elizabeth knighted Cecil and he was sworn in as the youngest member of the Privy Council. Cecil took a leading role at Queen Elizabeth’s court after the death of his father in 1598 and served not only Elizabeth but also her successor, King James I.

Cecil saw many crises from the Spanish Armada to the war in Ireland. He also had many run-ins with Robert Devereux, Earl of Essex. Devereux was unsuccessful in Ireland after Cecil convinced Devereux to go to Ireland to stop the uprising. With Devereux’s failure and unauthorized return after agreeing a truce with the Earl of Tyrone, Cecil saw this as an opportunity to place Devereux on trial. Later, in 1601 he led the ill fated Essex Rebellion and was sentenced to death.

Cecil’s position at court grew with the death of many of Elizabeth’s closest advisors such as, Robert Dudley, Sir Walter Midmay, Sir Francis Walsingham and even his own father William Cecil. Cecil was pivotal to matters of state security and he oversaw the smooth transition between Elizabeth and James’ rule. It is believed that he was in secret communication with the King of Scotland before Elizabeth’s death as he was to be Elizabeth’s heir, even if she would not publicly name him. Upon the Queen’s death she made a silent gesture to Cecil for him to write to James to invite him to be the next King of England.

Cecil was highly decorated by King James on 20th August 1603 he was created Baron Cecil of Essendon, in 1604 Viscount Cranborne and finally Earl of Salisbury in 1605. James also persuaded Cecil to exchange his home from Theobalds, Hertfordshire for Hatfield Palace which Cecil extensively rebuilt.

Cecil began pushing for the laws of the last monarch regarding Catholics to be reinstated pushing James to believe that Catholics could still not be trusted; this was proven for Cecil with the actions of the Gunpowder Plot. Catholics plotted against the new King and planned to blow up Parliament at the state opening.

Suffering from poor health and scurvy Cecil took a journey to Bath, to take the hot spring water but he died at Marlborough on 24th May 1612 before the trip could be completed and buried in Hatfield parish church. Despite his position at court Cecil died £30,000 in debt and much of his estate was sol off to pay his debts.

In the years leading to her death she had lost many of the courtiers that were close friends of hers from Robert Devereux, who was executed for treason in 1601 to Robert Dudley, who died in 1588 and was believed to be Elizabeth’s true love. Elizabeth’s most trusted advisor William Cecil died in 1598.

In late 1602 Elizabeth was out walking and caught a chill and began complaining of feeling unwell. Elizabeth retired to Richmond Palace in March and refused to allow the doctors in to examine her, she also refused to take to her bed and rest. Elizabeth would stand for hours and sat occasionally. Elizabeth eventually lay on the floor for four days where she grew weaker and eventually was unable to argue with her ladies in waiting who moved her to her bed. Elizabeth’s Privy Councillors gathered around her in the hope that she would finally name her successor but she was too weak to even talk. Elizabeth signalled to Robert Cecil who understood that it was a sign to name James VI of Scotland as her successor.

Archbishop Whitgift was called to the Queen’s bedside to offer prayers and Elizabeth slowly drifted into sleep and never awoke finally passing away on March 24th. A proclamation was issued to declare Elizabeth’s death and the succession of James VI of Scotland. Due to the way the Elizabethans still followed the Julian calendar Elizabeth actually died on the last day of 1602, with each New Year taking place on 25th March. A new year for a new ruling dynasty.

Elizabeth’s cause of death was never known as no post mortem was carried out however two theories of her death were simply old age or blood poisoning caused by the white lead and vinegar mixture she used upon her skin.

Elizabeth was laid to rest of 28th April 1608 in Westminster Abbey.

Under her leadership England advanced significantly in the Arts through the works of William Shakespeare, Christopher Marlowe and John Donne. England also explored many new lands through Sir Francis Drake, Sir Walter Raleigh and Sir Richard Greenville. She also successfully saw off many attempts of invasion from the Spanish. The death of Elizabeth saw the end of the Tudors and she left England in a better place than when she took the throne.

Tomb of Queen Elizabeth I at Westminster Abbey.

Robert Devereux, second Earl of Essex, was beheaded on 25th February 1601 after a failed attempt to overthrow Elizabeth I.

Devereux was one of the Queen’s favourites, however they had a fiery relationship, in 1598 Elizabeth refused to grant one of Devereux’s requests and as a result Devereux turned his back on the Queen. Seen as a breach of etiqutte which saw Elizabeth loose her temper and slapped Devereux, who in retaliation reached for his sword. He was soon banished from the court.

A year later he was sent to Ireland as Lord Lieutenant of Ireland, forgiven by the Queen, to help stop an uprising. Devereux failed to fulfil his role y not putting a stop to the rebellion, fighting inrelevant fights and wasting the army’s funds. He also signed a truce with the leader of the rebellion, which caused concern back in England. Concerned at what was being said back in England, Devereux left his troops in Ireland and set off to England, disobeying strict orders from Elizabeth herself. He arrived at Nonsuch Palace on 28th September 1599 and stormed into the Queen’s bedchamber where she was unclothed and without her wig. Devereux was interogated by the Privy Council for five hours the following day to explain his actions. He was placed under house arrest at York House.

By August 1600 Devereux was freed but without his sweet wine monopoly, this was his main source of income. Furious at the Queen taking away his income Devereux began plotting to overthrow the Queen and government and began defending Essex House. On 8th February 1601 Devereux with a small army of just over 100 men carrying swords departed from Essex House on the Strand. They headed into the city via Ludgate Hill where a barricade was placed by a troop under the leadership of Sir John Leveson in an attempt to stop Devereux. Both sides began to fight but when Devereux’s step father, Sir Christopher Blount, was injured he soon retreated back to Essex House only to be arrested and sent to the Tower of London.

Devereux was tried on charges of treason on 19th February and found guilty. Devereux begged to be executed privately away from the baying mobs that executions bring. Standing on the scaffold before the block he removed his cap and coat before kneeling and indicting that he was ready. It took three attempts from the axemen to sever his head before his head was held up to the small audience watching.

Devereux was the last person to be beheaded within the Tower of London. 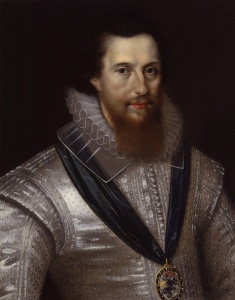