It is believed that Dudley had long hoped to marry Queen Elizabeth herself but it became more and more clear that she had no intentions of marrying anybody let alone her favourite, Dudley. Therefore, Robert began secretly looking for a wife. He had met Lettice Knollys, daughter of Catherine Carey and granddaughter of Mary Boleyn, when Lettice was 21 and married to Walter Devereux. Robert and Lettice enjoyed a brief flirtation at the time but it was nothing more than an attempt to make the Queen jealous after she had flirted herself with Sir Thomas Heneage.

After Devereux had been sent to Ireland Lettice remained in the employment of her first cousin, Queen Elizabeth and had regular encounters with Robert. Lettice was also present at Kenilworth Castle in 1575 when he entertained the Queen for 19 days, in an apparent last ditch attempt to win her hand in marriage.

Rumours began surfacing regarding the nature of Robert and Lettice’s relationship made worse when Devereux was sent back to Ireland. Devereux died in September 1576 leaving Lettice widowed with their four children to raise, they were forced to seek accommodation and favours from family and friends.

Finally accepting that the Queen would not marry him nor any other, Robert began negotiations with Lettice’s father and brothers in the hope that he could marry her. On the evening of 20th September 1578 Robert welcomed Lord North into his home at Wanstead and confided in him that he would be married in the morning. Robert also told his chaplain “that he had for a good season forborne marriage in respect of her Majesty’s displeasure and that he was then for sundry respects and especially for the better quieting of his conscience determined to marry with the right honourable Countess of Essex”.

The couple were married early on the 21st September between 7am and 8am with the bride wearing a loose gown. Only six people were present at the wedding including Lettice’s father and brother, Richard along with Robert’s brother, Ambrose and two friends the Earl of Pembroke and Lord North.

Queen Elizabeth was furious that Robert had married without her permission she banished the couple from the court, eventually allowing Robert to return but Lettice was not allowed back.

In the early years of their marriage in order to avoid further wrath from the Queen Lettice continued to call herself the Countess of Essex and not Leicester. She also continued living discreetly at her family home in Oxfordshire. Things changed when she gave birth to a son in June 1581, by 1583 Lettice and their son were openly living in Robert’s London home as man and wife, which infuriated the Queen further.

The relationship between Elizabeth and Robert never fully recovered after he married Lettice and although she still relied upon him and sent him on military missions abroad. The couple remained married until Robert’s death in 1588. The couple are buried together in the Beauchamp Chapel of the Collegiate Church of St Mary, Warwick alongside their son. When Lettice died in 1634 she had commissioned an epitaph to be fitted onto their tomb which read that she was buried with the ‘best and dearest of husband.’ 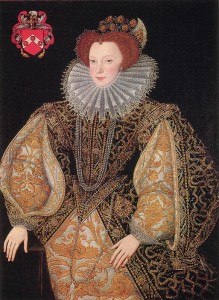 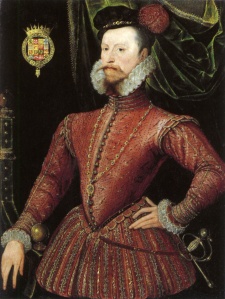