Catherine Parr died of puerperal fever, which was also known as childbed fever. It was also the illness that killed King Henry VIII’s third wife, Jane Seymour. It was not an uncommon cause of death amongst women in Tudor times as the hygiene around childbirth was very poor.

Catherine’s body was wrapped in a waxed cloth, to prevent decay and was encased in a lead coffin. Her chief mourner at her funeral was Lady Jane Grey as her step daughter Elizabeth had been sent away from Sudeley Castle following an alleged scandal involving Thomas Seymour and the young Princess.

The funeral service was performed in English, the first of its kind, and relatively short as Catherine was a believer of the reformed faith. The funeral contained psalms sung in English, an offering for alms, three lessons and a sermon spoken by Miles Coverdale, well known for translating the Bible. Catherine was buried in the chapel within the grounds of Sudeley Castle with an inscription on her lead coffin which read;

“Here lyeth Queen Katheryne Wife to Kinge Henry the VIII and The wife of Thomas Lord of Sudely high Admy… of Englond And ynkle to Kyng Edward VI.”

Catherine’s tomb was discovered in 1782 and when the coffin was opened the wax cloth was removed from the body and it was discovered that Catherine was well preserved and she still had hair, teeth, nails and her flesh was still soft and moist with her arm weighing the same as if she was alive.

When the coffin was opened again in 1817 there was nothing but a skeleton, it was now that the coffin was moved to the tomb of Lord Chandos, the family that resided in Sudeley Castle at the time. It was carefully restored on the orders of Lady Anne Greville, Duchess of Buckingham and daughter of the 3rd Duke of Chandos. In later years the chapel was rebuilt by Sir George Gilbert Scott who built a canopied tomb wih a recumbent marble figure crafted by John Birnie Philip. The tomb had four crests carved on the side one for each of her husband’s. 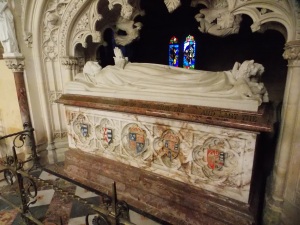 On 30th August 1548 the Queen Dowager, Catherine Parr gave birth to a daughter at Sudeley Castle, the home she shared with her fourth husband, Thomas Seymour.
Catherine Parr spent the final three months of her pregnancy at Sudeley Castle preparing for the birth of her first child. Catherine ensured that she was surrounded by her closest friends including her chaplain, Miles Coverdale, her almoner, John Parkhurst as well as her ladies from when she was Queen.

Shortly before her confinement was due to begin Catherine decorated the nursery, it was situated looking over the gardens and chapel. It was decorated in crimson and gold velvet and taffeta. Beside the cradle was a bed with crimson curtains as well as a separate bed designated for the new child’s nurse.
The daughter was named Mary, after the Queen Dowager’s eldest step daughter and future Queen. Just six days after her birth Catherine died of puerperal fever and was laid to rest within the grounds of Sudeley Castle. Mary was then brought up with her father as her main guardian, Seymour took Mary to London and placed her with her aunt and uncle, the Duke and Duchess of Somerset, who had just had their own child. Mary remained here until Seymour was executed for treason just seven months later leaving Mary an orphan.

The burial place of the Queen Dowager Catherine Parr

Due to an appeal made to William Cecil by Katherine Brandon, Duchess of Suffolk we know that she was appointed Mary’s guardian after Seymour’s death, it appears that she resented being given the young child to care for and referred to her as ‘the Queens daughter’ in her letter. Katherine Brandon was appealing to Cecil to gain his help with talking to the Lord Protector, the Duke of Somerset regarding the upkeep of Mary’s household. The household was expensive to maintain as Mary was still the child of a Queen and therefore needed a lady governess, rocker and her own servants despite her young age. However, in January 1550 an act of Parliament was passed that allowed Mary to inherit Seymour’s properties and therefore a regular income.
Records show no other mention of Mary after this date, she was just 16 months old, she never stood forward to claim her inheritance and so it is believed that she died as an infant. It is likely that she is buried near Grimsthorpe in the estate owned by Katherine Brandon.

It is unknown when Katherine Champernowne, or Kat Ashley as she was later known, it is believed that she was born in 1502 and that her parents were Sir John Champernowne and Margaret Courtenay.

Kat’s early life is unknown and but she appears to have been appointed a waiting gentlewoman to Elizabeth in 1536, shortly after Anne Boleyn had been executed. Kat intended to keep Elizabeth’s mother’s memory alive with the infant.

After the birth of Henry VIII’s son, Edward, a new household was set up to care for him this included Lady Bryan who had been until then Elizabeth’s nurse. As a result in 1537 Kat was appointed governess to Elizabeth.

In her role as Elizabeth’s governess Kat would teach her young charge in every aspect from geography, astronomy, history, maths and many languages including French, Italian, Spanish and Flemish. Away from the classroom Kat would also teach Elizabeth dancing, riding, embroidery and needlework and by the time Elizabeth was six

years old she was able to sew a cambric shirt from her brother, Edward. Elizabeth said later in life that Kat ‘took great labour and pain in bringing of me up in learning and honesty.’ Kat played a huge part in shaping who Elizabeth would be in later life.

In 1543 with King Henry VIII marrying his sixth and final wife, Catherine Parr, Elizabeth began attending court more and more and Kat would accompany the young Elizabeth. With the death of the King, Elizabeth and Kat would go and live with Catherine and her new husband Thomas Seymour in Chelsea. However, it was not to be an easy time.

Thomas Seymour, despite his hasty marriage with the King’s widow, took a shine to Elizabeth and began a flirtation. Kat would witness Seymour’s attempts to potentially seduce the young girl and tried to stop them warning Elizabeth away from Seymour. Kat would eventually report her concerns to Catherine Parr, who instead of stopping it joined in and reportedly held Elizabeth down whilst Seymour slashed at the 14 year olds nightgown. However, things turned serious when Catherine caught Elizabeth in Seymour’s arms and Kat lectured Elizabeth on the need to stay out of trouble and protect her reputation especially as she was second in line to the throne.

These events would be eventually investigated by King Edward’s Privy Council when Seymour was being investigated for treason. On 21st January 1549 Kat was arrested and imprisoned in the Tower of London whilst the claims were investigated. Kat told the investigators everything she knew and protested Elizabeth’s innocence as well as her own and was eventually declared innocent and released in early March 1549.

Kat would return to Elizabeth who was now residing at Hatfield and would remain with Elizabeth until 1554 when Elizabeth was imprisoned in the Tower by her sister, Mary I. Elizabeth was later released and Kat rejoined her charge but it was short lived as in May 1556 Kat was arrested and sent to Fleet Prison after books that were discovered in her possession that was considered treasonous. Kat was imprisoned for just three months but on her release she was forbidden from seeing Elizabeth again.

Upon Elizabeth taking the throne the order was revoked and Kat returned to Elizabeth and was appointed First Lady of the Bedchamber and became one of the most influential people in Elizabeth’s court.

Kat Ashley died on 18th July 1565 and Elizabeth was left heartbroken at the loss of her long term companion. After Kat’s death Elizabeth would say of the woman who stayed by her side since she was four. ‘Anne Boleyn gave me life but Kat Ashley gave me love’.