In 1532 King Henry VIII was planning a trip to France to meet with the French King, he wanted to take Anne Boleyn with him as his Queen, however, they were not yet married and she as she was not a peer of the realm she would not be recognised in France so Henry decided to create Anne the Marquess of Pembroke.

The Earl of Pembroke title had been extinct since the death of Henry’s great uncle, Jasper Tudor, it also signified the birthplace of his father King Henry VII therefore the title was held in high regard to Henry and he could bestow no greater title on her until they were married.

On 1st September 1532 Henry VIII held the ceremony to grant Anne with the title and land in Wales worth over £1000. The ceremony was held by Henry VIII in Windsor Castle, it witnessed by many of Henry’s peers and clergy including; Anne’s father and uncle, Thomas Boleyn and Thomas Howard as well as Charles Brandon, Edward Lee the Archbishop of York, John Stokesley the Bishop of London and Stephen Gardiner the Bishop of Winchester. Also present was the French ambassador.

Anne was accompanied by Mary Howard, her cousin, the Countess of Derby and Countess of Rutland and they were led into the ceremony by the Garter King-at-arms. Anne wore ermine trimmed velvet and many jewels and let her hair flow freely behind her, as was common for coronations. There was no doubt that Henry wanted everybody to know that he intended to make Anne his wife and Queen.

Stephen Gardiner, Bishop of Winchester, read out the patent of creation to the crowd whilst Anne knelt before the King who invested her with the coronet, robe of estate and charters of creation and of the lands. In the ‘Letters and Papers, Foreign and Domestic, Henry VIII’ there is a record of the ceremony which states;

Sunday 1 Sept. 1532, 24 Hen. VIII. The lady was conveyed by noblemen and the officers of arms at Windsor Castle to the King, who was accompanied by the dukes of Norfolk and Suffolk and other noblemen, and the ambassador of France. Mr. Garter bore her patent of creation; and lady Mary, daughter to the duke of Norfolk, her mantle of crimson velvet, furred with ermines, and a coronet. The lady Marques, who was “in her hair,” and dressed in a surcoat of crimson velvet, furred with ermines, and strait sleeves, was led by Elizabeth countess of Rutland, and Dorothy countess of Sussex. While she kneeled before the King, Garter delivered her patent, which was read by the bishop of Winchester. The King invested her with the mantle and coronet, and gave her two patents, one of her creation, the other of 1,000l. a year. She thanked the King, and returned to her chamber.

There is also recorded a valuation of the lands that were bestowed upon Anne;

“Valuation of her lands.

Total of the lands of the lady Anne marchioness in Wales, over and above casualties not charged, 710l. 7s. 10¾d., out of which she is charged to pay by the King’s grants yearly, 199l. 5s. 11d., ‘which the tallage or knowledge of money will discharge for the time; and after that, the fines for the sessions and the customes which be not charged in the value will discharge them.’

Sum of the lands in England: Corry Mallett, Soms., Hundesdon, and Estwyke, Herts, ‘lands late Philip Pary’s, in Hundesdon,’ manors of Stansted, Roydon, Fylollyshall, and Cokkeshall, and Weston next Baldoke, 313l. 5s. 3¾d. Total for England and Wales by the last gift of the King, 1,023l. 13s. 2¾d.”

The title was also granted to any male heirs, either legitimate or illegitimate, that Anne may have. The title of Marquess of Pembroke ceased to exist either upon Anne’s marriage to Henry or upon her death in 1536, it is unknown for definite when she stopped calling herself that. 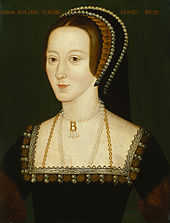 Sir Reynold Bray was born in Worcester in 1440 and was educated at the Royal Grammar School within the city. Bray’s early life is relatively unknown he married Katherine Hussey around 1475 and the couple had no children.

In 1485 at the coronation of King Henry VII he was created a Knight of the Bath and in later years a Knight of the Garter. Bray was also appointed as Treasurer and Chancellor of the Duchy of Lancaster. Bray’s main role within the new government was to restructure the King’s finances. Bray attempted to continue what King Edward IV had started which was moving away from a system that collected royal revenues through the Exchequer and instead use the Chamber of the Household system as a way to collect money. Bray was essentially Henry VII’s equivalent to a Prime Minster and served Henry in administrative matters, including the making of his will.

Bray died on 5th August 1503 and was buried in St George’s Chapel, Windsor Castle. In his will Bray asked for to be buried in the Bray Chantry Chapel within the Chapel but also left instructions on how to complete the Nave;

“I will that my executors immediately after my decease endeavour themselves with all diligence, with my goods and the issues and profits of my lands and tenements by them to be received and had, to make and perform, and cause to be made and performed, the work of the new works of the body of the church of the College of Our Lady and St George within the Castle of Windsor; and the same work by them wholly to be performed and finished according and after the form and extent of the foundation thereof, as well in stone work, timber ,lead, iron, glass and all other things necessary and requisite for the utter performance of the same.” 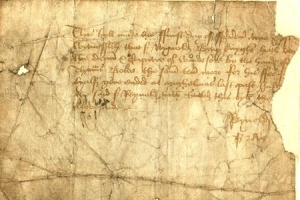 Part of Sir Reynold Bray’s will