Mary Queen of Scots was forced to flee Scotland following her forced abdication in favour for her one year old son, James. Although Mary had attempted to regain the throne it was unsuccessful and show had no choice but to seek help in England.

Following her troops defeat in battle just outside of Glasgow, Mary wrote to Lord Scrofe of Carlisle declaring her intentions to cross the border into England. Mary set sail from Drundrennan Abbey and landed at Siddick near Workington on the afternoon of the 16th May 1568. One of Mary’s men, Lord Herries, sent word ahead to Workington Hall that Mary had landed. The Curwens received the former Scottish Queen and provided for her.

It was at Workington Hall that Mary wrote a letter in French to Queen Elizabeth I asking for help and protection from her cousin and England.

Mary only stayed at Workington Hall for three days before she was escorted to Cockermouth by Henry Curwen and Sheriff Richard Lowther who delievered Mary to Lord Scrofe who took Mary to Carlisle Castle where she would begin 19 years of imprisonment. 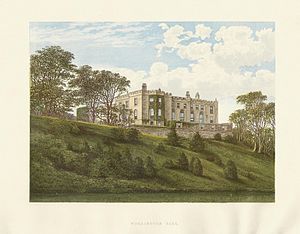